Most of us have probably either seen or played a .io game. These .io games have been among the most popular games for the last few years. So let's go over why these games have gotten so popular, and then break down the best .io games to play in 2021. These massive multiplayer games all have the same general idea with some minor changes depending on the game. The idea is to collect bits and grow your character, the more bits you collect the bigger you get. If you run into yourself or an opponent, you lose all your bits and must restart. However, once someone must restart all their bits will stay where they lost. Other players can then go over them and collect them for themselves. The goal is to get as big as possible.

There are some versions of the game where you collect land instead of bits. In these versions you try to go around the map connecting areas to make them your land. Once you have a piece of land you must defend it from other players. If you run into the player, you lose all your land. You can also go over other players’ land and steal it for yourself. Regardless of the specific rules, .io games have become very popular among gamers everywhere, but what is it about these games that make them so popular?

One aspect that makes .io games so fun is the competition. In certain games and game modes, you can play against other real people, and in other games you can play against computer generated bots. Whether you are playing real people or bots, there is a fun competitive aspect to all .io games. It is fun to compete to see who can grow the largest or who can control the most space. Plus who doesn’t love being the small underdog and taking out the big giant? This is one of the most rewarding feelings in .io games. You get to have the satisfaction of knocking out a difficult opponent, and you get their bits to quickly grow your character and become a giant yourself.

Another thing that makes .io games so popular is how simple they are. The controls are never overly complicated regardless of the game you are playing. Also, because of the open way the games are set up, there are never any difficult levels that you find yourself stuck on. You are always able to spawn in and play, and every game is a new slate with different challenges. Everyone can relate to really enjoying a game then running into a level that for some reason, you just can’t get past. You try and try until eventually you get tired of playing the same level over and over again. You never have to worry about this happening with .io games! (Don’t get us confused, we love games with challenging levels, we even made a list of them here!)

Overall, there are a ton of reasons we can put down for why .io games are so popular. However, until you try it for yourself you will never know. With that in mind lets go over some of the best .io games you can play! 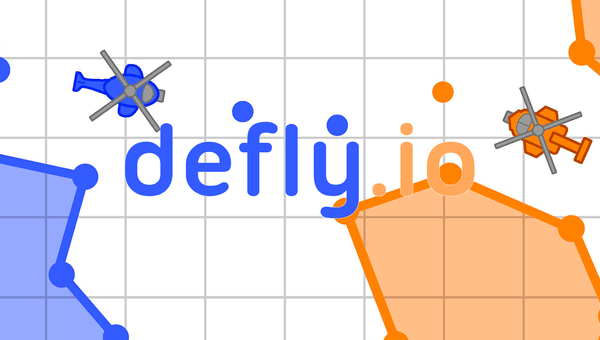 Defly.io combines similar stylistic and mass-multiplayer elements of .io games you may be familiar with, but with a unique focus on strategy. Taking elements from Agar.io, you are a helicopter that has to ‘build’ a base. You do this by placing dots with the space bar and connect your dots to make the base. In this version of .io you can shoot little dots at enemies and their bases. If you shoot a dot on the enemy’s base you can make it disappear. One the dot is gone, and their base is no longer connected they will have to repair it if they want to have the base. You can also shoot dots at other enemies to knock them out and make them start over!

Agar.io is another popular .io game. This game is actually the first .io game ever! It was made in 2015 and quickly became a hit among gamers. Don’t let the fact that it’s the oldest .io game scare you off though. Despite a lot of competition from newer .io games, Agar.io has been able to hold up as one of the best .io games to this day by adding new game modes like battle royale and team vs. team.

Powerline.io is a modern evolution of .io games, with several new elements introduced to spice up gameplay. You'll still be collecting bits to grow in size, but with an added twist. In order to get a speed boost in this game, you'll have to get close enough to an opponent you can zap power from them to make yourself go faster. This is a good way to get in front of your opponent and knock them out so you can take their bits. When you combine this with the game's gorgeous neon colors and frenetic gameplay, you get a game that is fun to play for hours on end!

Overall, it is not hard to see why .io games have become so popular among gamers. Their fast-paced play and simple controls make the game very easy to enjoy. It is also perfect for casual or competitive play. If you haven’t already, we recommend checking out Powerline and Defly which you can find right here on Cool Math Games. Head on over and start playing, we wish you the best of luck as you try to conquer the .io world!