How to Win 2048 - The Easiest Strategies and Game Guide

2048 is a 4x4 tile game created by web developer Gabriel Cirulli. The goal of the game is to combine numbers to create bigger number tiles in order to get to the magic number, 2048.

At first glance, it seems like a game of chance. However, it is absolute game of strategy that players are able to control the outcome of. Many games are like this, where they may seem like total luck, but once players are able to recognize the nuances of the game, luck becomes much less of a factor. Take solitaire for example, where players are able to win a majority of the time when the game is played perfectly. You can check out that blog here if you are interested.

With that being said, let's hop into how to win 2048, as well as the rules that come along with it. This guide will give you the 2048 strategy you need to win games every single time. So keep reading and become a 2048 game master.

A low number such as a 2 or 4 will appear in a random spot with every move you make. This makes the board fill up faster, and the rows more difficult to move as the game goes on.

The most important thing in your 2048 strategy is to stay organized. If you are randomly swapping numbers in the game, you won't get very far in the chaos.

You know that a random number will appear on an empty space on a tile. So make sure you're sliding your tiles in a way, so you can control the empty space in which the tile will appear

An easy way to beat the game is to keep your largest number in a corner. The way to do this is to keep the row or column filled with other numbers.

This guarantees it will not move while you move around the other numbers. It also guarantees that your largest number won't be lost in the middle of the board, making it harder to add to as the game goes on. 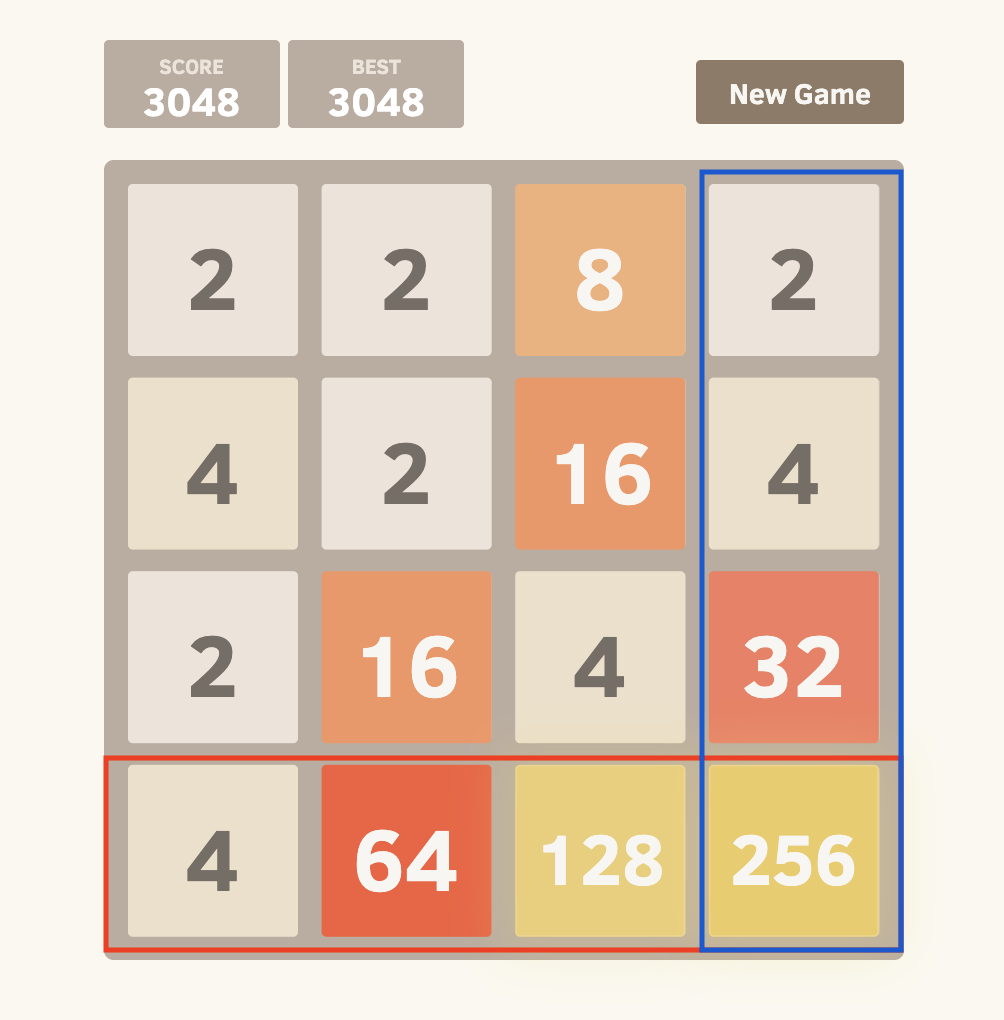 Try to move the tiles in 2 directions for the most part. Eliminate one direction you won't use unless absolutely necessary. This will make your tiles a little more organized. Less is more is probably one of the most criticial strategies when learning how to win 2048. If you can keep it simple, you will increase your scores rapidly.

It is easy to start recognizing a pattern in 2048 and you can use those patterns to your advantage. If you know what directions you are utilizing, you can build a chain. The most popular chain is a snake chain formation.

A guaranteed way to win 2048 is to combine more than one 2048 strategy to strengthen your game. For example, let's say you put your largest number in the top right corner.

You can then use the less is more strategy to eliminate down movement and focus on moving right and up.

Finally, you can use the less is more strategy to build chains, that will in turn build up the corner and beat the game.