Bouncy Quest – Hop To The Finish With Our Complete Guide

Looking for an action-packed platformer game? Look no further! Our new game Bouncy Quest is full of fast-paced gameplay that you will love. In our bouncing ball game, you are playing as an orb bouncing around the map, trying to save your fellow bouncy ball brethren.

How to Play Bouncy Quest

The controls for Bouncy Quest couldn’t be easier! All you have to do is use the arrow keys to move left and right. Your bouncy ball automatically bounces up and down for you, so there’s no need to worry about using the up and down arrows. It’s all about timing and moving left and right.

This means that it won’t take long at all for you to pick up the controls and start doing great in this bouncing ball game. However, you will need a few strategies to make it through all 20 levels of the game. Read on to learn a few tips and tricks to help you out.

While the controls of Bouncy Quest couldn’t be easier, actually beating the bouncing ball game is a real challenge. To win, you will need timing, reactions, and a good strategy to approach each level with. We’re here to help with the last one.

Pay attention to which blocks you are bouncing on

Various blocks have different effects on your bouncing ball. Some will make you bounce extremely high, while others will provide you with almost no bounce at all. Some blocks break and send you down into spikes, while others require coins to allow you to pass through.

This variation in terrain is really what makes Bouncy Quest so much fun to play. You can’t just bounce your way through the entire map as quickly as you want to. Instead, you have to think about how far you need to jump in between each platform, and which blocks will be the best to get you there.

Stock up on plenty of coins

As we mentioned before, there are some blocks that will let you go through them, but only if you have collected a certain number of coins. This is why it is important to pick up almost every single coin that you can. Sometimes they may be a little bit out of your way, but it will often be necessary to pick up most of the coins on the map.

Once you have all of the coins, the block will immediately let you through once you make contact with it.

Take notice of which orbs are your friends

There are orbs scattered around the map that you must save in order to progress. However, other orbs are trying to stop you from getting around the map. If you run into an enemy bouncy ball, you have to restart the level and all of your progress is lost.

Luckily, the way to tell the difference between the friendly orbs and the enemy orbs is pretty simple. There are two main ways to differentiate between friend and foe. The first is to look at the eyes. If the bouncy balls have two eyes, then they are your friend and you need to save them. If the balls have one large eye, then they are your enemy and you must try to avoid them at all costs.

The other way to differentiate between the two is to look for an exclamation point above their heads. The friendly bouncy balls will have exclamation points above their head as a way to call out for help. The enemy balls will not. The ability to differentiate between friend and enemy is an extremely important part of the bouncing ball game, so make sure to remember these tips.

Slow down for a minute

As with most platformer games, taking the time to develop a strategy for each map is important. Most people tend to just hop right in after they fail a level, without taking the time to think about why they failed it. We recommend that you take at least a few seconds to think about what you could have done better, then try the map again. It sounds a little bit silly, but give it a try at least. You might just be surprised by how much of a difference it can make.

While Bouncy Quest is a pretty unique game, there are a couple of titles from our site that have a similar feel to them. If you end up beating all 20 levels of Bouncy Quest, we highly recommend that you check out these games afterward. 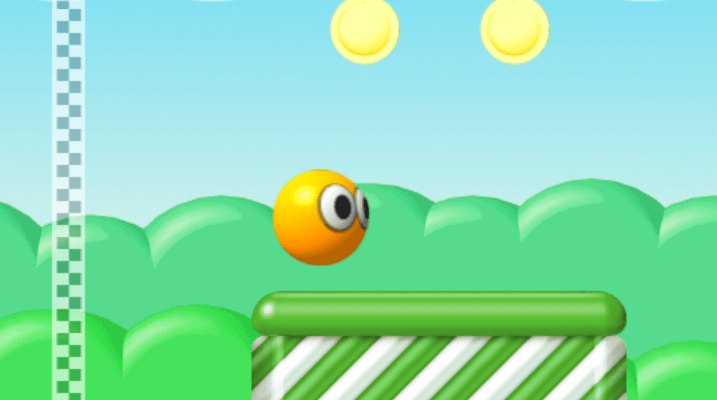 Mondo Hop is just about as close as you can get to Bouncy Quest. Much like Bouncy Quest, players are constantly bouncing up and down in Mondo Hop. The only options are to move left and right, trying to get through the map without falling off of any ledges. Collect all of the coins and avoid the giant chasms in order to win.

Kaboom Swing has one of our favorite concepts of any game on the site – players are playing as a bomb that explodes across the map. You must jump over giant chasms and dodge spikes to make it to the end of the level. Much like Bouncy Quest, it is a platformer game that takes a lot of timing and skill in order to complete every level.

Now that you’ve learned all about Bouncy Quest, make sure to give the bouncing ball game a try! After you play, give us a rating to let us know what you think.