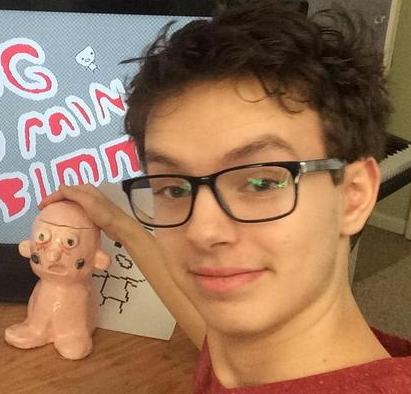 When I first heard the theme "use your head," I immediately gravitated towards the idea of a guy with a huge head who you can swing into things. Bimmy was going to have a much larger head and be much slower, but as I began programming it, I realized the fast-paced Angry Birds-esque flinging mechanic would be much more fun.

The software I used for the game itself is called GameMaker Studio 2. I used paint.net for what little visuals there are and DelfeMask to create the music.

When making games for Game Jams (I've participated in 3 now) I always find that my plans are much more ambitious than what ends up being produced. Big Brain Bimmy was definitely my best Jam game so far, but that doesn't mean it's exactly what I had hoped it would be. I couldn't include all of the mechanics I wanted to include, meaning I had to make all the levels using only a couple of assets I had already made. I also had some trouble with like collision issues, figuring out how to get pausing to work, and the system for allowing the music to slowly add on layers as you progress.

My passion for game development started when I was in 5th grade (I'm in 10th now). I found a mobile game called Blocksworld, and it looked awesome. Essentially, it was a physics simulator with simple block coding. I was able to master the game's mechanics and (I think) gained a modest following in the game's community. I eventually found Scratch, which is a very similar and much more well-known programming tool.

As far as inspirations, I love rhythm games and the EarthBound series, as well as action puzzle games like Puyo Puyo and Tetris. None of these went into Bimmy, I just like them. I also like games to have heavy emphasis on story, which is why I'm so bummed that I didn't get to include the story behind Big Brain Bimmy (it has one). Some day I'll expand the Bimmyverse, but for now it remains a simple six level browser game.

Drag and release your mouse to send Bimmy flying! You can re-launch him whenever you want, as long as he has hit a wall since the last time you launched him. Make your way safely to the end of each level.

By
Tom B.
User Profiles
All Games A-Z